A while back I as I was scrolling thru an affiliate marketing Facebook group I kept seeing this guys name pop up. I didn't know much about him and at the time he was just doing OK in his business.

About a month after he popped up on my radar I saw a promotion that he did and he sold $24,000 worth of digital products in 5 days.

I'm about to show you the strategy that I watched him use.

Before we get started I have to point out that he uses his personal profile for this strategy. It also works for Facebook business pages too, you just have to adapt it a little bit.

Also this strategy does take time just like any other strategy, but it does work.

This strategy is also 100% organic meaning that he didn't pay any money to build his business.

How he set up his personal profile for leads

In the Image above the first thing you see is a picture of him not a picture of a product or company. Make sure you are doing the same because people buy from people not from companies. Also no one is going to want to hang out with you if it looks like you are trying to sell them something.

Next he tells you exactly what he does. He is here to help business owners set their business on fire using social media.

You can do the same thing with your profile, just make sure it doesn't look like a sales pitch.

Here is a trick I learned from the great Mark Hoverson.

He said he sales portals to a new world. People are at point A and on the other side of the portal is point B.

Ill give you a couple of examples:

Point A - A woman who just had her 2nd child and wants to lose the extra belly fat that she has now.

The portal is your weight loss product

Point B - She can now fit into her cheerleading uniform that she used to wear in high school.

Point A - A man wants to take his new wife on an unforgettable honeymoon but he doesn't have a enough money.

The portal is your discount travel business

Point B - Now they are able to go on a honeymoon that was better than he dreamed of and ne only had to pay half the price.

Now I'm sure you get the point but this what you get here on Josh's profile before you even scroll down to see any content.

After you find out he is going to help you set your business on fire the next thing is an invitation to join his Facebook group.

In this case the group is the portal.

Add your websites to your profile

In this picture he has all of his websites that you can go to learn what he has to offer.

Im not sure how many sales he gets by putting links on his main profile because it isn't his main strategy.

Here are just 2 posts that I found on his profile. There are plenty more like it. Any post on his profile is nothing but pure value. That is why they have 573, and 495 comments each time he posts.

The other thing that he does is, alot of people that have worked with him tag him in their posts when they get a win. 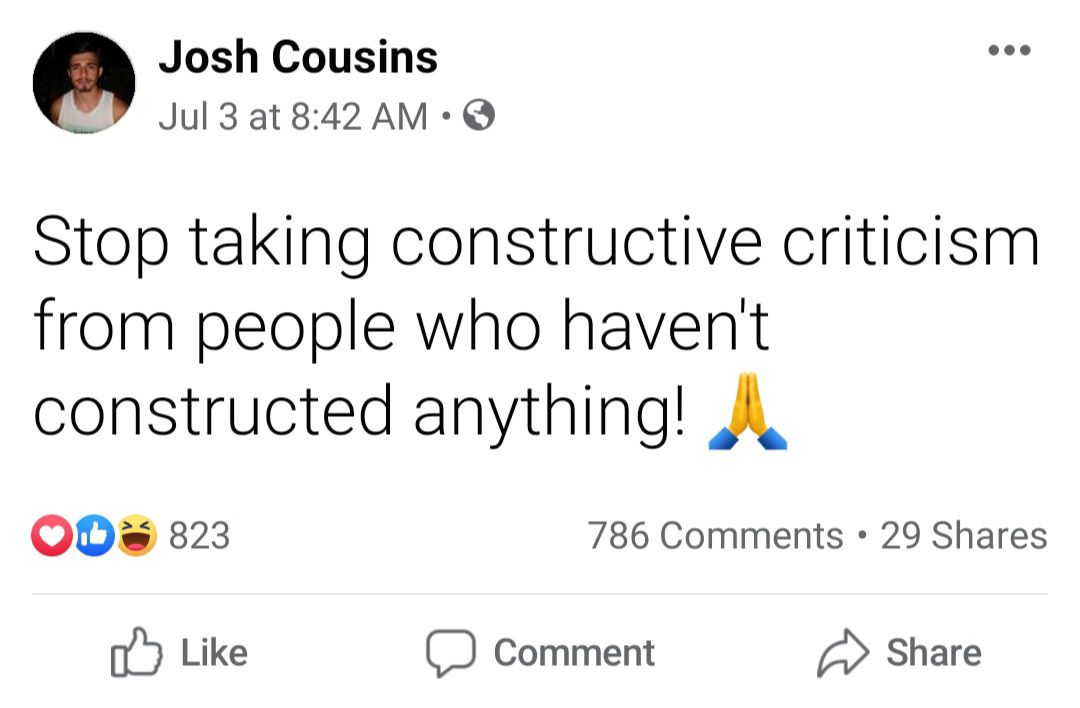 Here is another one and it has 786 comments. The point is to add value when you post. As you can see there is nothing for sale on any of these posts.

Aside from pure value posts Josh has 2 Facebook groups. I'm going to focus on one of them. The reason why is because building a Facebook group can be hard. Building 2 Facebook groups is twice as hard and you should only build "Good Karma Business: Organic Facebook Strategies"

This is the first group he built and it is also the group that he used to generate $24k in 5 days. 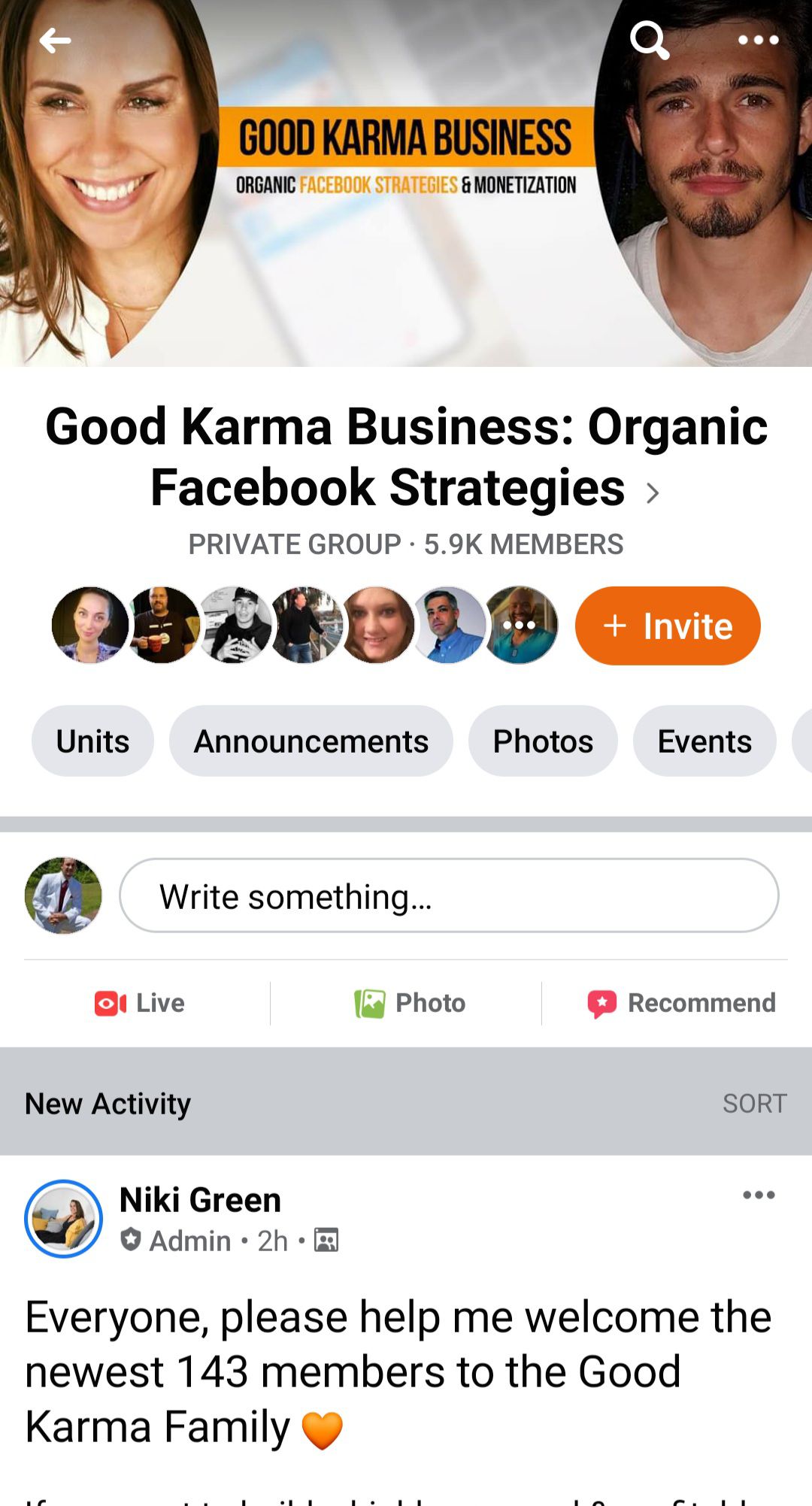 This is what it looks like. It has 5.9 thousand members which isn't that much compared to some groups.

How to get members into your group

Before you go about building a group it is a good idea to know how you are going to get people into your group. I made this mistake at one time. I built a group and it had really good content in it but I had no idea how to get people into my group.

The reason I showed you Josh's personal profile first is because this is the first step to getting people to your group. People need to trust you and see you as an authority that they can learn from, then when you invite them into your portal they will happily go.

Here is how it works. He posts nothing but pure value posts, then he gets alot of people to engage on these posts. Next is to interact with the people and reply to any comments that are there.

Remember engagement is that name of the game when it comes to Facebook.

The more engagement you can get, the more people you are going to get that want to follow you and add you as a friend.

The next thing he does is periodically invite friends to his Facebook group. This is a step by step process. His Facebook friends see him as an authority so now when he invites them to his group they join. Not all of them but a good number of them.

Inside the group are more and more pure value post but these posts are exclusive to the group.

For example there is a units section that teaches how to master the Facebook algorithm, how to find your perfect customer, mindset and more.

Remember people saw him as an authority before they were ever in the group. This adds to that authority by giving them free content that they can use right now to build their business.

It is always a good idea to find people who are also doing good at whatever it is that you are doing. That's what he does here is find other people to interview and he interviews them in the group.

Another good reason to interview people is because people want other people to see their interviews. That means they will share your interview with their audience. If you can find people that have a big audience and interview them, part of that audience will become your audience.

Facebook lives are my favorite audience building tool. I will put them against picture or text posts any day because in my personal experience Facebook lives have built my audience at least 10 times faster than the others.

Josh does this in his group. One thing he does is ask me anything lives where you ask any question and he will answer it.

Another thing he does is find common problems that he can solve.

When you start to build an audience they will start to ask questions and tell you what problems they have. Pretty soon you can start to see a pattern of problems that more that one person has and you can help them fix that problem.

If you can help people fix a problem they start to see you as even more of an authority. 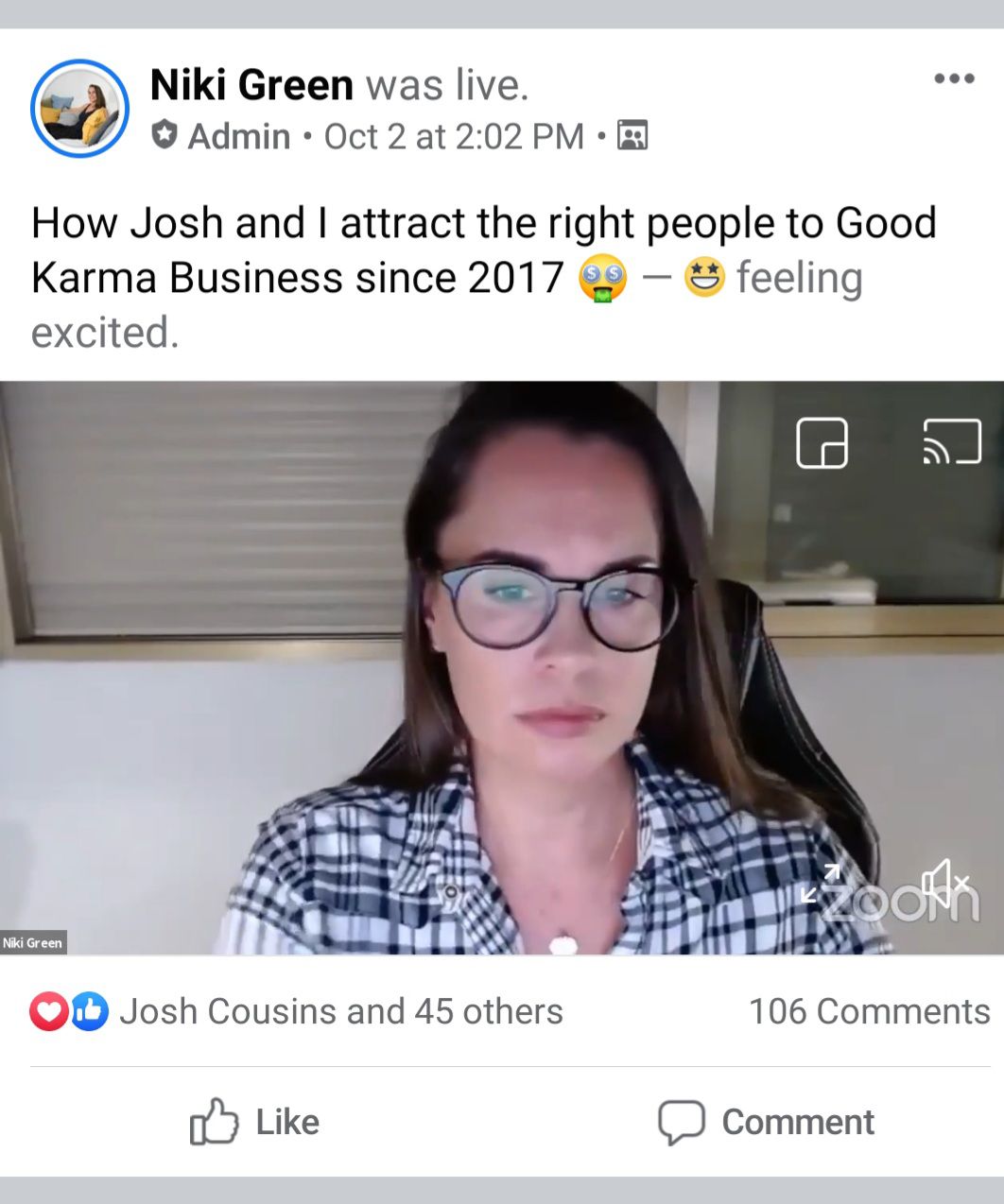 Here is a Facebook live this his girlfriend and business partner did about attracting the right people to your group.

Here is a cool hack to really build your engagement and I think it is brilliant.

In the picture above he took a screenshot of one of his posts from his regular Facebook profile and talked about it a little bit. The brilliant part is that he said if you haven't seen it comment me and I will tag you in it.

Just in the group it has over 1,000 comments which is a crazy amount of engagement. To add fuel to that fire his profiles posts already get alot of engagement so when he starts tagging people, not only does it shoot it back up Facebook newsfeed, but everybody that has ever commented so far will get a notification that there is a new comment.

Start getting engagement on your profile and I can promise you that you will become an authority quick.

Now for the fun part. That's we are all here for is to make money right? 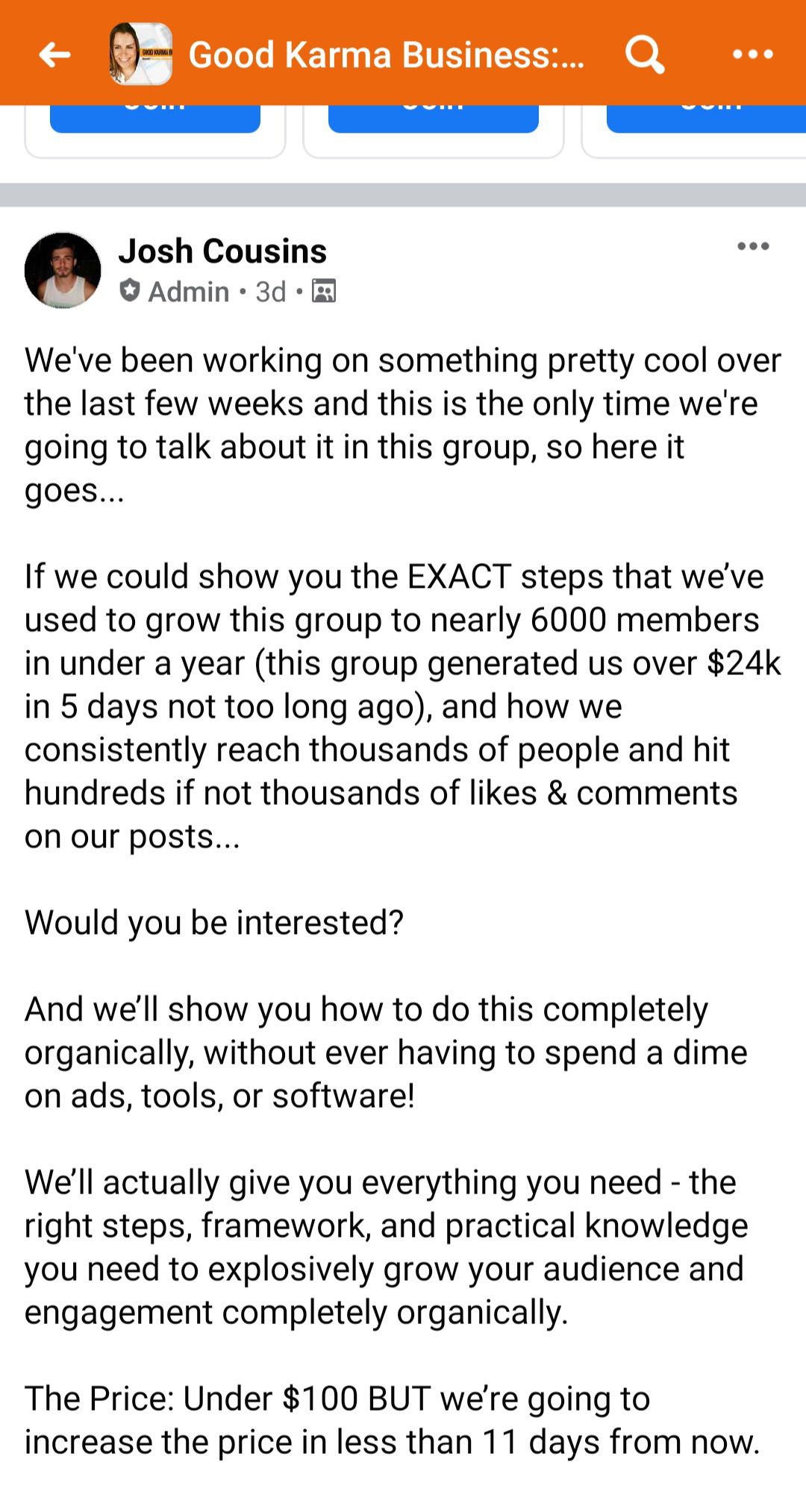 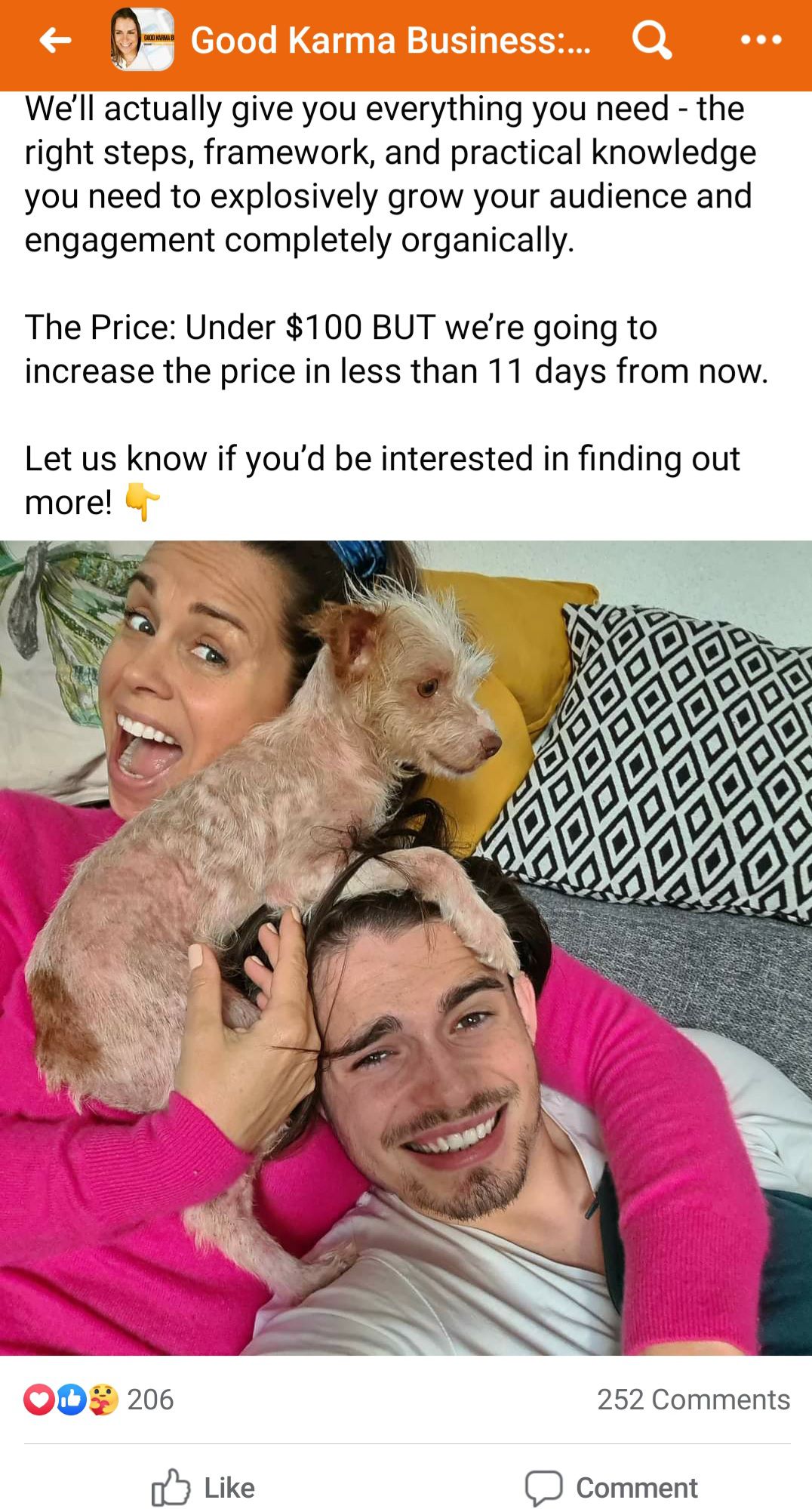 This is a selling post inside the group. He talks about what he is going to sell, puts a discount on it for a short amount of time, then says to comment if you want it.

Its really that simple.

What happens next is that people comment and he sells it for a discount for 11 days according to the post.

There is more to it though. The people who buy the course that he is selling are going to give a testimonial.

In my opinion testimonials are the best selling trigger there is because you have a bunch of other people promoting your products for you.

Now that you have a bunch of people promoting for you, you can raise the price and sell the same product to more people and let the testimonials do the selling for you.

Its a pretty simple process, but it does take time and you do have to put in some work but as you can see, this strategy can be rewarding.

Use other groups to build your group

One other thing that Josh did was use other groups to help build his group.

I'm not sure how many groups he used but It is probably only a couple. I have found that you don't want to use alot of groups and also Stacey Hall says that she only uses 2 to build her business.

By only focusing on 2 groups, you can become an authority in those groups pretty fast. If you try to use more than 2 groups you run the risk of spreading yourself too thin and you won't get as good of a result.

Just like before what Josh does in these groups is just keep adding value. Answer questions that people have, and make your own post.

People will want to know what you are doing and add you as a friend. Now you have more people to add to your group.

What to do now

I hope you can see the power of this strategy. It's a 3 tier strategy and each tier helps to build the other. If you can get these 3 right you can easily build a big business for yourself.

Not only can you use this strategy with your personal profile but you can use groups to build any other strategy.