The marketer that can hit it out of the park every time knows how to speak in a way that gets their audience to take some kind of action and they create a duplicatable action plan.

Marketers that fail are all over the place. They have tried every strategy in the book and they are addicted to whatever is the new strategy.

The successful marketer has a marketing plan that works and it might sound boring because it kind of is, but they do the same thing everyday.

If you want to be successful in marketing, build a strategy that works and do the same thing everyday.

This is exactly what Ben Settle did. His strategy is super simple and requires little time.

Who is Ben Settle? 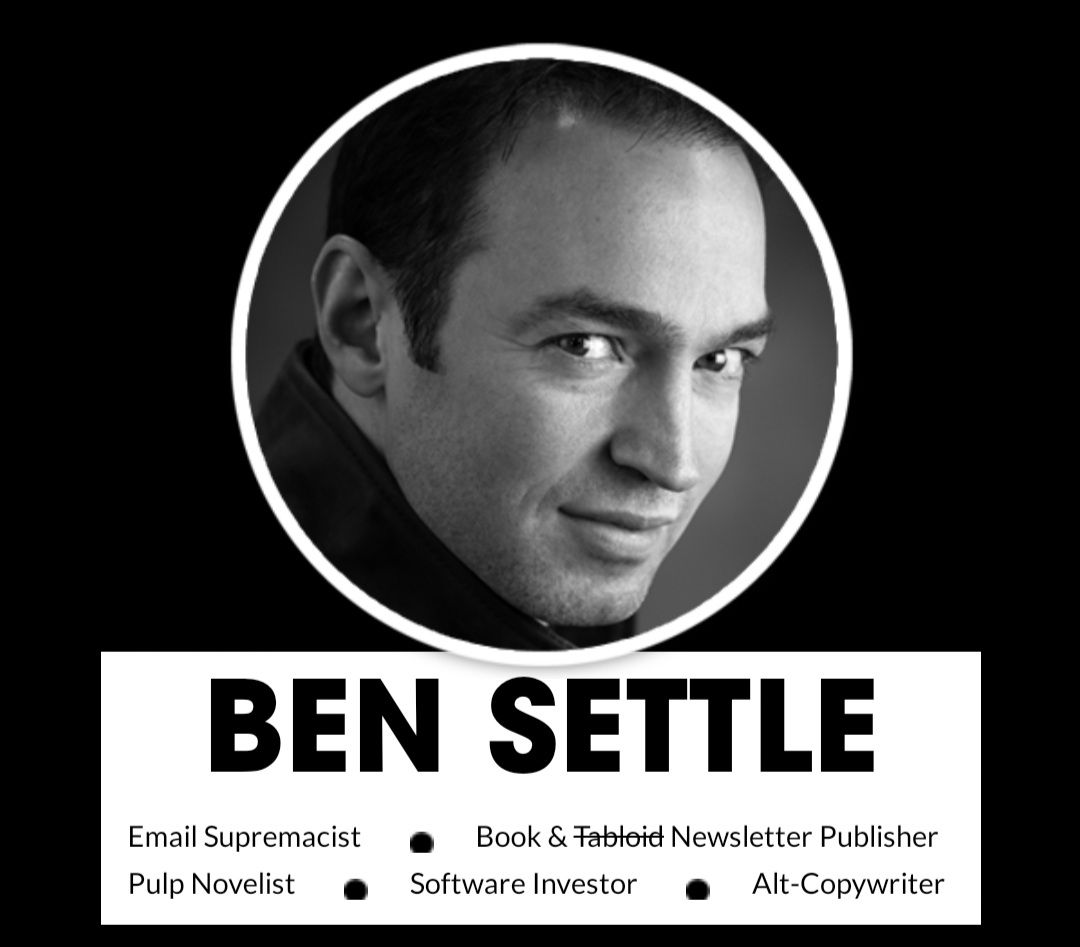 Ben Settle is a master copywriter, self proclaimed anti Goo-Roo, and crotchety Grinch of email marketing (in his own words).

If you have been in the network marketing arena for a while you will remember magnetic sponsoring. Its an ebook and platform that was around years ago and made 10’s of millions of dollars in product sales. Ben wrote the sales page for it and to this day his sales letter hasn’t been beat by any other copywriter.

He has also wrote sales letters for other niches such as golf, internet marketing, prostate cancer, and others, but he quit doing work for clients because he says he wants to work on his own business and not have to work long hours.

Everything points to a $97/month offer.

Now Ben has an email copywriting business and the strategy is super simple. The reason I want to show it to you is because you can adapt it to any business and I will show you how to do that later in this post.

This is the entire business model:

Any affiliate offer that he promotes has something to do with copywriting since anybody that is on his list is there to learn about copywriting.

He sells on every one of his emails. Alot of marketers will tell you not to be too salesy but in Bens own words “if you aren’t selling then what is the point of writing an email?”

Next, every email that he writes gets repurposed as a blog post. He isn’t trying to rank on google he just wants people to be able to read his past emails.

After that the only thing left is to get traffic to any page of his blog and get them to opt in.

This not a hard marketing strategy where you have to promote on a lot of different platforms, you just build the funnel and send traffic to it. You don’t change anything.

The traffic method is super simple too. He talks about building a list but he doesn’t talk about how he builds a list anywhere other than the email players club news letter, so I’m not sure about where exactly he gets leads from on his own.

He has said on a couple interviews before that the best quality leads come from other people.

When you are a master at your craft people are going to want to interview you. It helps to build their audience because they are talking to someone that people want to listen to, but it also helps to send people to your own list.

So that is what he does is get interviewed by other people on their podcasts, and youtube channels.

The cool thing about it is that those are evergreen traffic strategies that other people are building, so an interview that was posted 4 years ago could still continue to build your list for you and you didn’t have to be the one to do the hard work of building your audience.

If you want to be good at marketing I highly recommend learning to leverage the work of other marketers.

How Ben sells in emails

I find this part to be genius because Ben Settle has built an email list that spend a part of every day just to read his emails.

Any other marketer that has made it will tell you that you have to be doing video, writing blog posts and using other marketing channels, but Ben doesn’t even have a Facebook account.

The real reason I find it to be a work of art is because he built a base of rabid fans by selling them every time they hear from them.

To do this you are going to need to be able to do 2 things:

How to write good headlines

Ben likes to be somewhat on the edge but not over the edge. Here is an example of an email that I am sure get plenty of opens:

The headline – Success secrets of a US president who was plagued by constant excruciating pain. 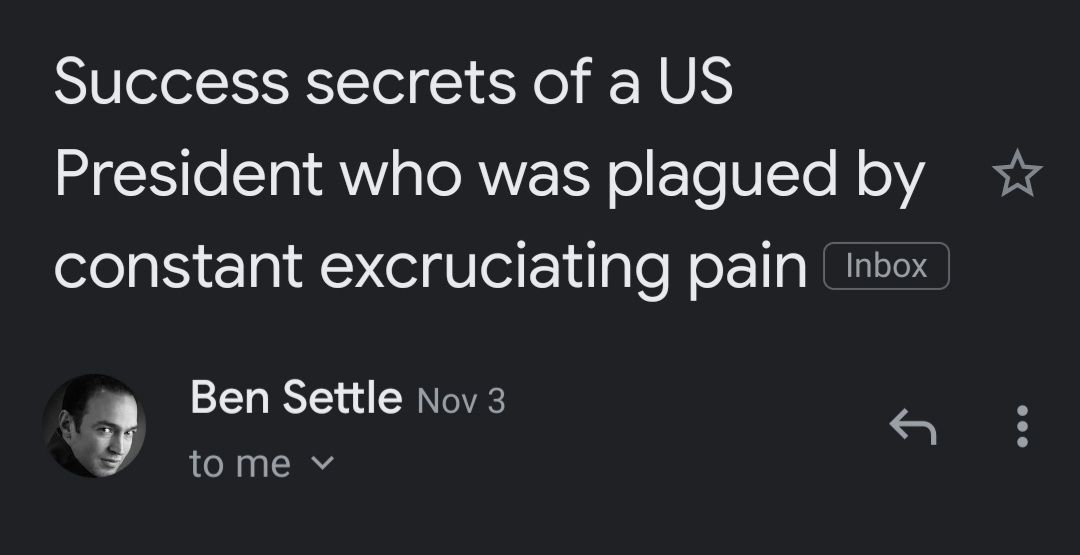 I opened this email because I was pretty sure he was talking about our current president. I didn’t fully read the headline, I only read the part about success secrets of a US president, so I figured it would be controversial.

This email was also sent right before the 2020 Presidential election.

Well it turns out I was wrong and that was just a good headline to get me to click, and it worked. Im sure I am not the only one.

The email went on to talk about President Andrew Jackson who had lead poison during part of his life along with other problems.

Boy was I wrong.

Here is another one : The copywriting sex robots are coming 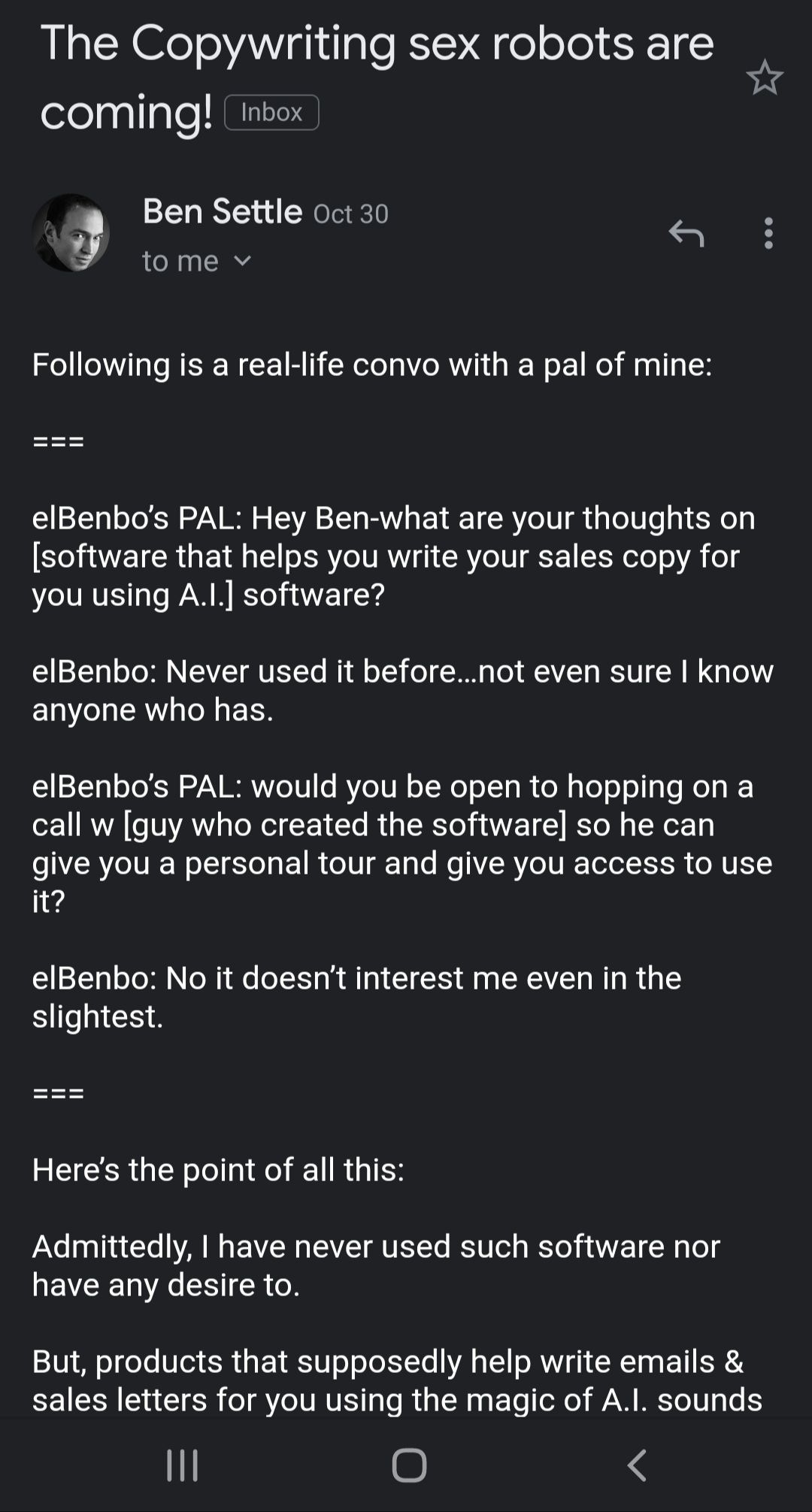 Yes this is a real email subject line and of course I clicked because I was curios as to what it had to say.

Turns out it has nothing to do with sex robots, it was all about using copywriting robots vs actually learning how to write copy.

Ben does this alot. I can’t think of an email I have read from him. They are either about him, a story about a question that someone sent him, or a story about someone else.

The power of story telling is one of the best ways to get people to listen to because humans have been hard wired since the dawn of time to listen to stories.

Think about it, you can go to any group of people and start telling a story. They listen because they want to know what happens.

The first sales page I ever remember reading was story based. I don’t remember who it was that was selling it, or even what they were selling but I specifically remember it because he told the story about how he used to be a landscaper and he was working on a multi million dollar house, and he asked to owner of the house how he can afford something like that, so the home owner took him inside and showed him his internet business that made enough money to buy the house and cars. 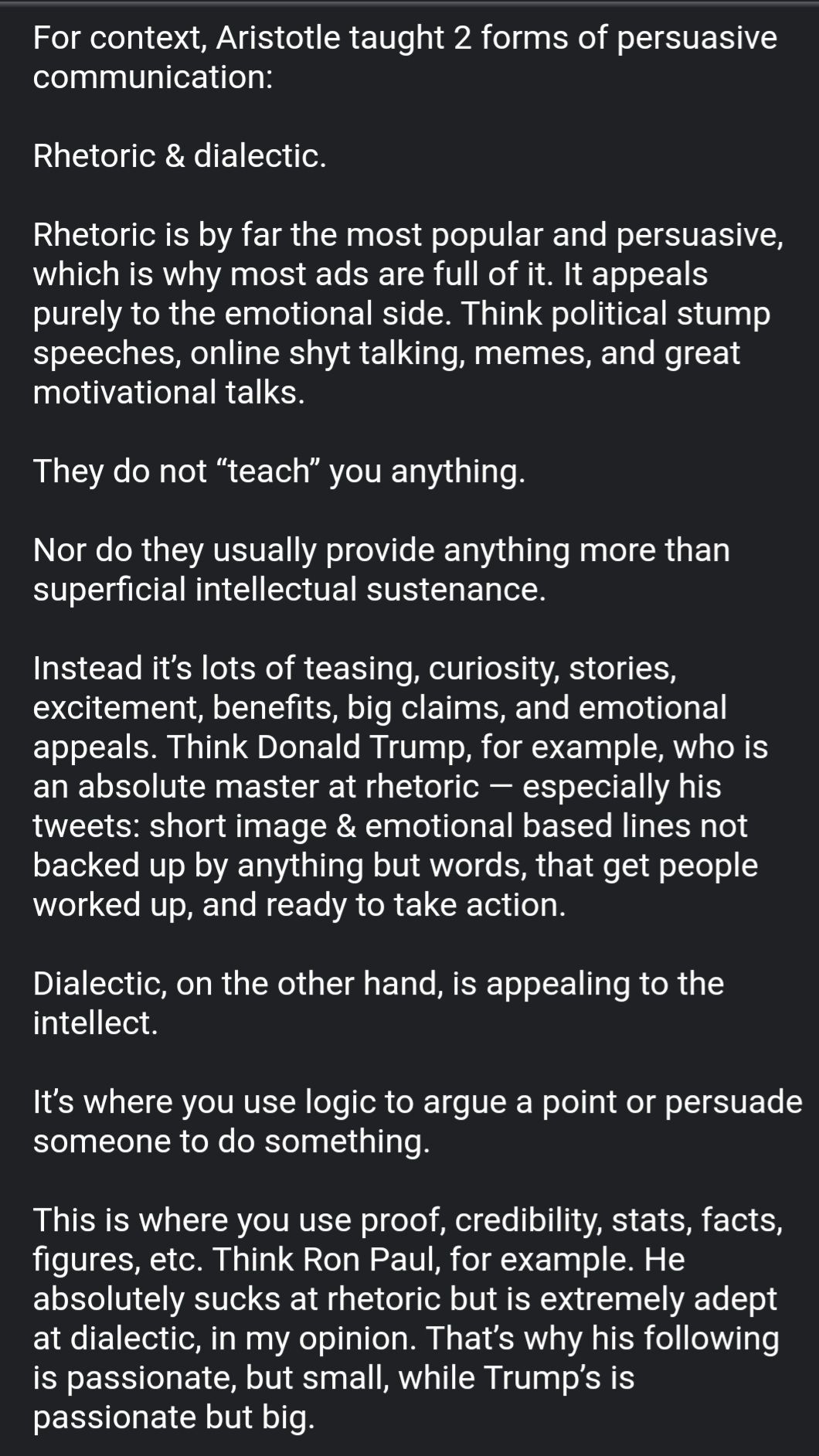 In the screenshot above you can see how he tells a story. It’s about persuasion. 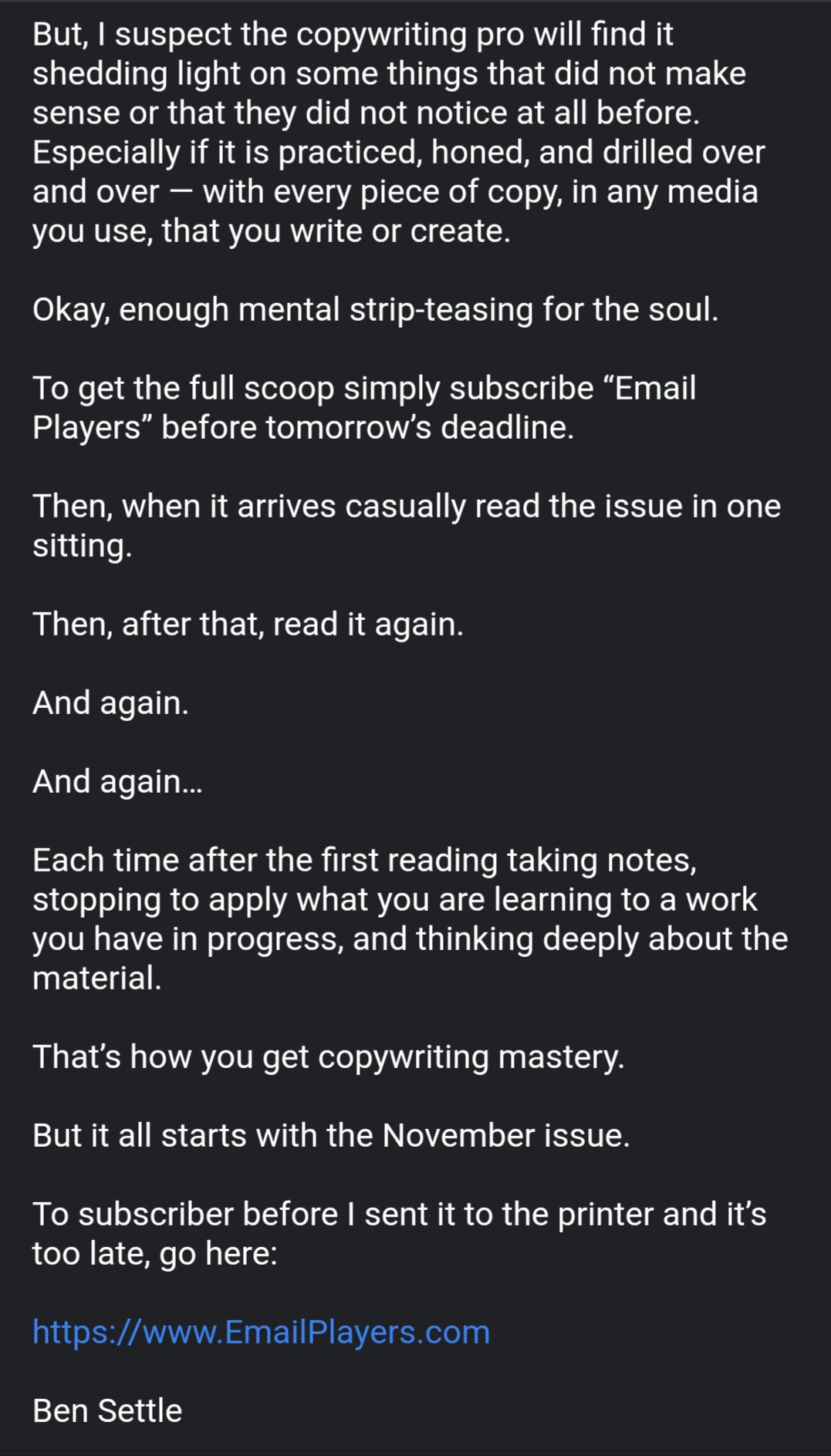 In this screenshot you can see the later part of the story and how he transitions it into a sale.

Every email is like this but it’s a subtle sale because it is entertaining, it teaches, and you just want to read it. Its also does a good job of making you want to buy.

How to tell stories

You can turn any everyday story into a sell. Here an example:

Let’s say you are driving and somebody pulls out in front of you. You get road rage and you are pretty P’d off at this point. Turn that into a story. I’m going to make one up plus a product and tir them together. I will use forex as an example.

Subject line – I had road rage and it made me think of you.

Email body – I was in a good mood for most of the day but that all changed when I was driving. There was nobody behind me for a quarter mile but someone had to pull out in front of me while I was going 60 mph down the highway. ]

I was P’d off and yelling at them. I had to stop on the side of the road for a minute to calm down. It was at that moment I said to myself, I’m not doing this anymore.

I’m going to get good at trading forex so I don’t have to drive to work and deal with this traffic.

So when I got home I hopped one the phone with my mentor and set up a plan to replace my income this year. His name is Jeff and you can work with us at “link” too.

I hope to see you there.

This might not be the best example, I get it but I just made it up in my head from a storty that I also made up. My point is that you can use everyday stories and turn them into sales.

How to use this as a network marketer

In the example above I just showed you a way to use it for forex. You can use it for anything though.

Build your funnel, there are only 3 parts, and send targeted traffic to it, then send emails based on stories.

You can also use things like politics (Just make sure you don’t go against any belief because you don’t want to divide your audience), current events, things you read in a book, anything you learned that day. The possibilities are endless. Its actually pretty fun coming up with content to see if people will click and read it.

How to spend less time with this strategy

Something I want to point out no matter what you are doing in your business is creating time blocks. The way it works is you spend time doing a lot of money making activities at one time so you don’t have to do it later.

This strategy really only takes about 10 minutes a day to write an email, and copy and paste it to a blog.

One way to get it done so you don’t have to worry about it later is to spend one day writing every email for a week. Then you copy and paste it all to your blog on the same day and now your job is done for the week.
Pretty simple.

That’s it. I recommend using this strategy with another strategy. Ben only works a little bit each day but we all don’t have an email list that will allow us to do that so you have to build it somehow. However you are going to build your list, I recommend doing it with this strategy.

Ben also emails his list at least once per day. I recommend doing the same so they get used to you sending them emails. Some people will un subscribe but that is ok. They probably weren’t going to buy anyway.

P.S. If you are getting less than 5 signups a week click here. We want to help